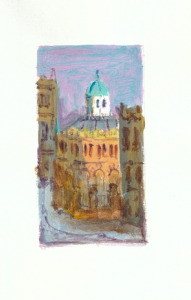 Nigel Frith has been creating works of prose, poetry and drama since his schooldays. This early output, some written in school exercise books, and that of his time at university in the 1960s makes up the ‘Suitcase Manuscripts’ series noted in the Catalogue. Frith’s immersion in English and Medieval verse at Oxford gave rise to his ‘The Lover’s Annual’, a medieval-style love poem, that was published by J.M. Dent & Sons in 1965. An updated full text version of ‘The Lover’s Annual’, re-titled ‘Troilus’, can be found in this section of the website.

Following university he continued to produce works in a range of forms and styles. As part of a growing interest in epic poetry and world mythology Frith wrote a series of novels inspired by the Hindu, Norse and Classical pantheons, that were published between 1975 and 1988. During the 1980s and 1990s Frith also wrote a number of plays that were performed in the UK and, in one case, Japan.

This section provides access to a selection of Frith’s published and performed works and material relating to them. It is hoped that more material will be added as it becomes available.