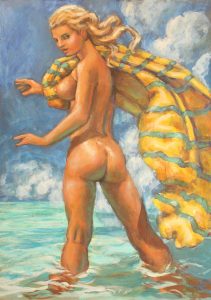 c. 1981
Acrylic on board
Height: 24in; Width: 17in
Frith: “[Electra, one of the Pleiades] the pose of this [painting] being of an enticing nature, but countermanded by her look and gesture, as if to say, contain any passion and direct it yonder: This is symbolic of her role as a Time-nymph of Science, who plays beneath the Forbidden West-world-tree, and exhorts Apollo to study the stars and promote Science, until the point at which he discovers her secret (electricity) which he does when he returns with the Renaissance through the work of Sir William Gilbert, 1600 (see Time-line). Before that, of course, in the Medieval Period, he has been disguised in armour, bearing a shield reflecting his own sun, but made black to signify his loss of Electra, as he journeys as a knight errant in her quest. This is featured in at least two landscape paintings in another section, one in a summery mead, and one (from my last Christmas card) by a wintry stream.”